Many Swiss companies are currently facing supply chain disruptions for primary goods and commodities. According to the findings of surveyed Swiss companies, industry associations and chambers of commerce, the current situation is unlikely to normalize in the short term. Global supply chain disruptions are leading to price hikes, longer waiting times, planning difficulties, revenue shortfalls and, thereby, decelerate the economic recovery in Switzerland and globally.

Almost a year ago, weakening demand and work stoppages were the biggest concerns for Swiss companies. At that time, the pandemic and the containment measures taken were a particular burden on sales. Even today, many firms remain preoccupied with the consequences of the coronavirus. However, the sales problem has now transformed into a production problem: four out of five surveyed companies are currently reporting problems in sourcing input products. This proportion is higher than during the first lockdown in April 2020. Almost the entire industrial sector is affected, including construction, wholesale, and retail. The scale of the problem is illustrated by the fact that 80 percent of industry representatives reported supply bottlenecks in their sectors. 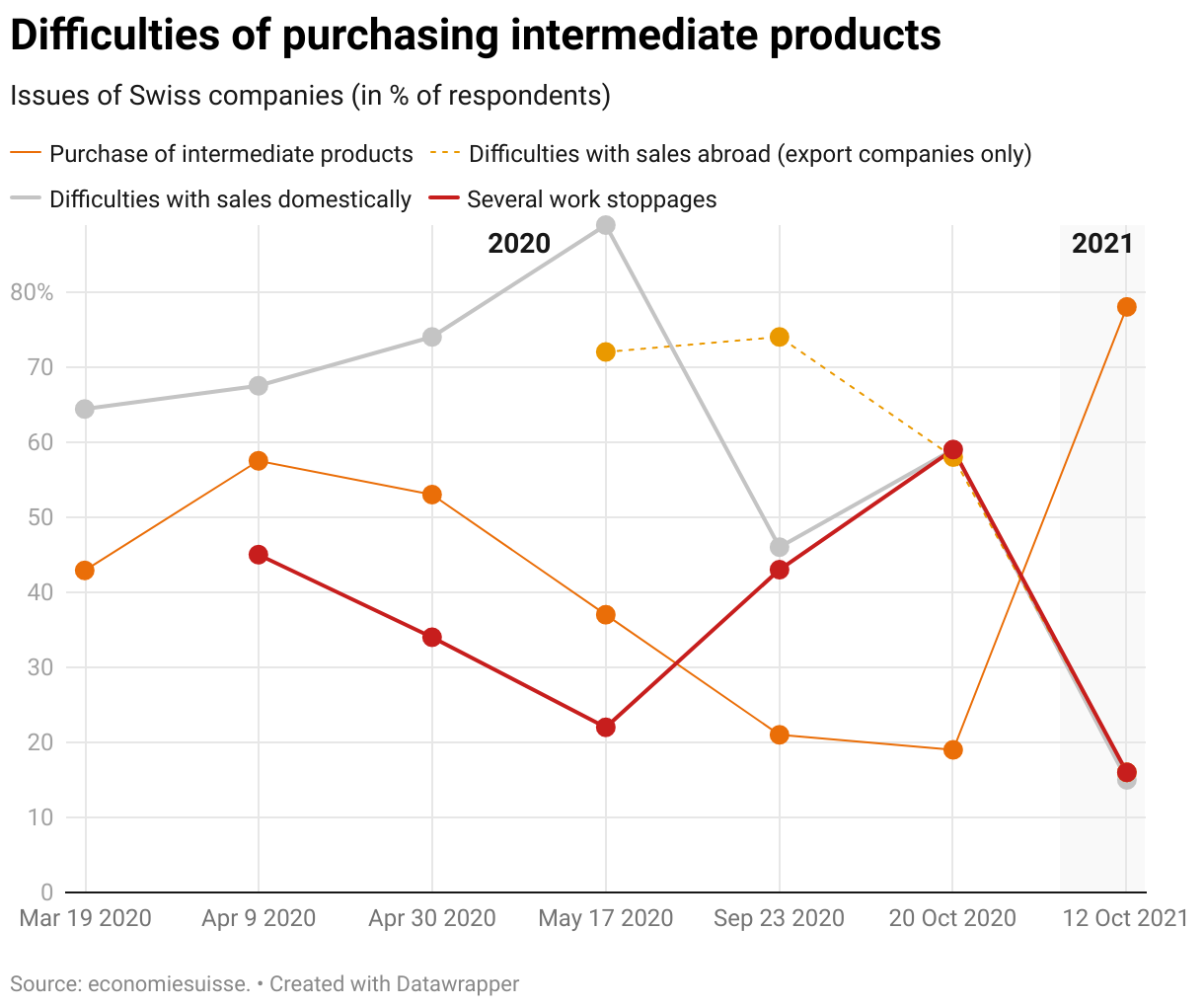 Whilst initially, mainly products from Asia were affected, supply chain disruptions are now occurring in almost all regions of the world. The Swiss enterprises, most of which are closely linked to the European market, identify Europe as the region most concerned, followed by Asia. The expansion of supply chain problems has not only progressed geographically, but also along product categories. Apart from shortages in commodities such as steel, aluminium and lumber, companies face rising energy prices in Europe and China, for example. This, in turn, leads to acute shortages of many intermediate products – semi-conductors, for example. However, there is not only a shortage of semi-conductors, but also certain plastics and chemical products. The shortages are also evident in the downstream consumer goods market, including everything from washing machines and cars to toys and skis.

The reasons behind the supply chain bottlenecks are manifold: most frequently cited by surveyed companies are problems with transport and logistics. Closed ports and a lack of containers are disrupting supply chains. In addition, production stoppages at suppliers are delaying manufacturing processes. Many Asian factories continue to slow or even stop production due to pandemic measures; in some cases, there have even been factory closures. Hence, 41 percent of the surveyed firms report corona measures in manufacturing countries as being responsible for the supply chain bottlenecks. Also, environmental events, such as Hurricane Grace, had an impact. Power outages additionally strain production.

Limited production capacities are falling together with increasing demand in the majority of firms. Pent-up purchasing power, governmental support measures, and the prospect of an end to pandemic-related restrictions are fuelling consumption. As a consequence, production cannot keep pace with demand. 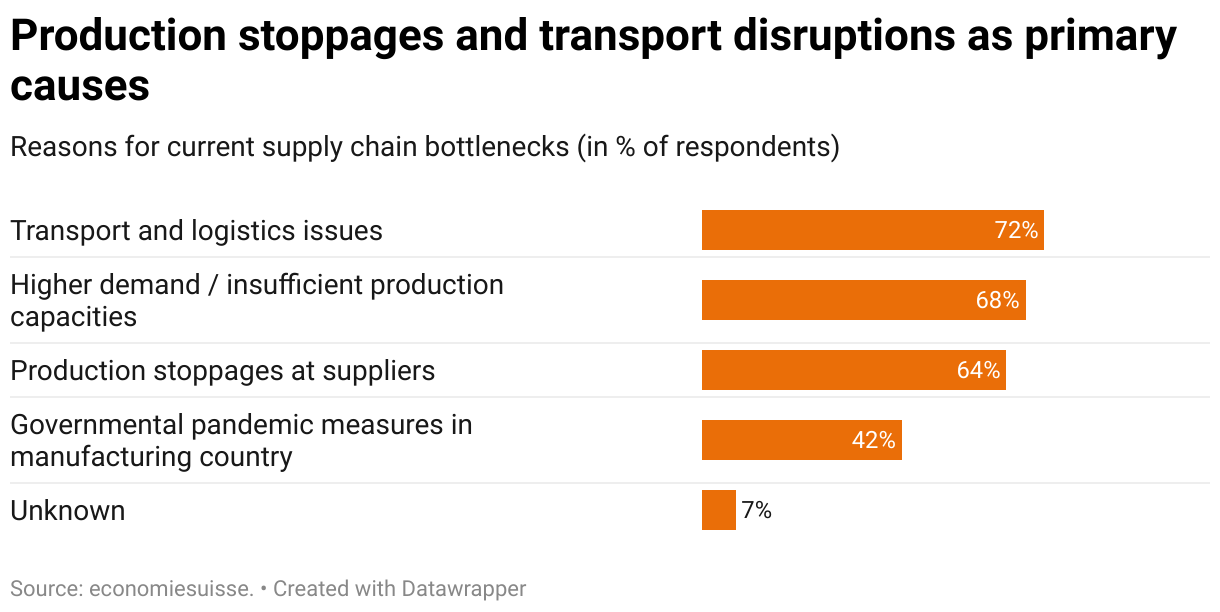 Firms are forced to increase prices, whilst refraining from downsizing

The bottlenecks are not without consequences. Longer waiting times and accentuated planning burden pose considerable challenges for companies. Roughly one fifth of firms have had to cancel existing orders or decline new ones. This is currently leading to a revenue loss for more than half of the firms affected.

Companies are trying to counteract these tendencies. Many companies have stocked up their warehouses. Around half of surveyed firms are looking for new suppliers in other countries, whilst a slightly smaller proportion is looking for alternative supply options in the manufacturing country. By contrast, manufacturing the missing components in-house is rarely considered, mostly due to a lack of internal expertise. Also, a reduction of staff is out of the question for most firms. This is hardly surprising in the face of a pronounced shortage of skilled workers. Nonetheless, just under six percent of surveyed firms, especially suppliers to the automotive industry, are seriously considering an extension of short-time work.

Many firms see themselves forced to adjust their own prices in the face of rising efforts and purchasing prices. Around half of surveyed firms have already increased prices, whilst another three-fifths intend to do so in the coming six months. Whilst prices for certain, specific components have risen by a factor of 100 or more, industry representatives expect a price increase of roughly 5% during the coming six months – calculated across all affected goods. A share of the input price pressure will be absorbed by lower margins, but problems with faltering supply chains and missing components will increasingly be felt by consumers as well. 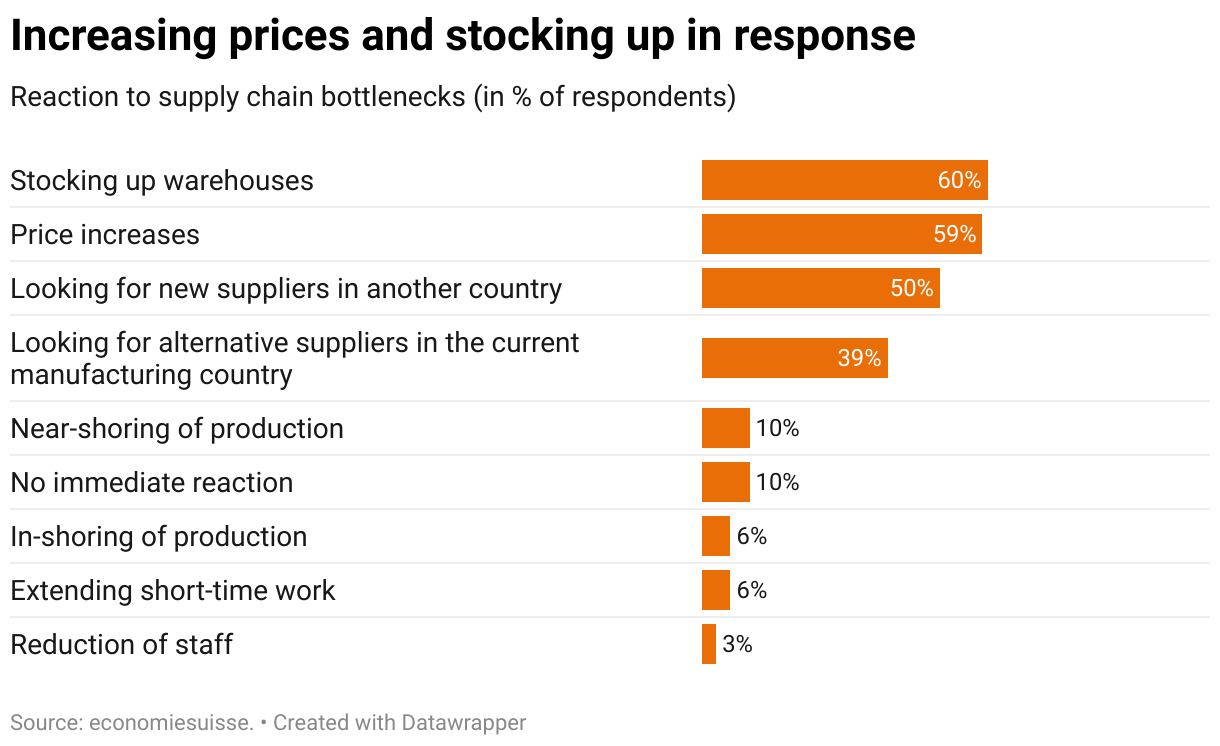 The extent of the impact of these distortions on the global economy will depend on the duration of the bottlenecks. The assessment of respondents gives cause for concern: affected industries do not expect supply chain bottlenecks to end until next year. Given these conditions, normalisation is likely to delay further. At the same time, rising prices for raw materials, energy and intermediate products are increasing the risk of rising inflation. This is a dangerous development and could significantly cloud the economic outlook for this and next year.

The survey has been conducted by economiesuisse from October 13 to October 19, 2021. 237 organisations took part. The survey covers all parts of Switzerland. 20 industry associations completed the survey on a consolidated basis on behalf of their industry. The evaluation reflects the current attitudes of the Swiss economy. The answers were not weighted and the results do not claim to be representative.

Corporate concerns: lockdowns and the war in Ukraine are worsening supply bottlenecks

According to the latest economiesuisse survey, difficulties in sourcing intermediate products and raw materials have increased further.