Digitisation: a real threat to the future of jobs or just a distorted perception?

Robots and computers taking over the labour market is what most see when asked how modern technology will impact their jobs. And it is the same fear that is currently playing an important role in the debate regarding digitization. According to a survey done by Edelman 54% of the employees who participated said that they are afraid that automatization will replace them sooner or later.

Robots and computers taking over the labour market is what most see when asked how modern technology will impact their jobs. And it is the same fear that is currently playing an important role in the debate regarding digitization. According to a survey done by Edelman 54% of the employees who participated said that they are afraid that automatization will replace them sooner or later.

The fact that new technologies can change entire industries of the economy is hardly disputed. Such changes in the world of work translate into a growing sense of insecurity among people. Quite naturally, the idea of an imminent loss of jobs raises existential fears. A look at history shows that fears of mass unemployment caused by technological progress are not new at all. At the beginning of the nineteenth century, English workers, fearing for their jobs, showed their displeasure by destroying machines in factories.

However, looking at the developments in the labuor market we can say, that the fear of unemployment resulting from technological progress is unjustified. Since the end of the 19th century, the number of employed people in Switzerland has increased fivefold, despite important technological achievements. There is no evidence for significant displacement neither in the unemployment rate nor in the labour force participation rate. 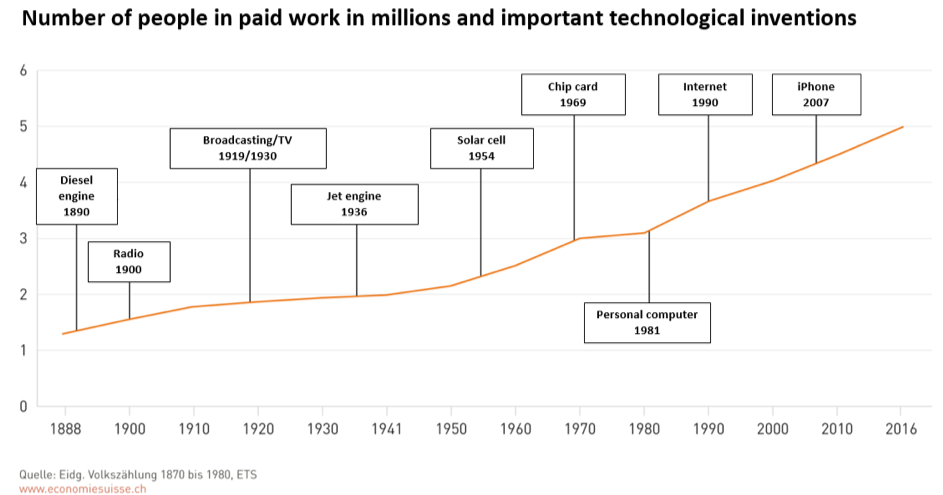 The recent economiesuisse study shows that in 2015, an average of 1,350 jobs were created each day in Switzerland. As a result, the Swiss labour market posted a gain of 40,000 new jobs per month and nearly half a million annually. This means that about 10% of all workers start a new job each year in a newly created or expanding business. In contrast, an average of 1250 jobs were lost each day in 2015. That made in total an additional 30'000 jobs. Although the Swiss economy was hit hard in 2015 by the strong appreciation of the Swiss franc, the private sector posted an increase in jobs. An interesting finding of the the study is that industries with many business closures also created more jobs on the balance sheet. 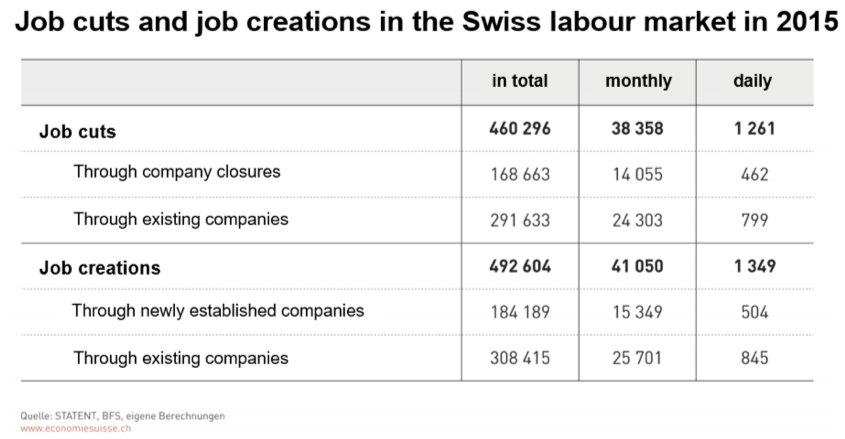 The above figures show that job cuts were always overcompensated by job creation. Why does the fear of technological unemployment still prevail in the minds? In order to determine the role of the media coverage in the excessive perception of unemployment, economiesuisse evaluated the reporting on job destruction and creation in five swiss newspapers. The evaluation shows that the selected newspapers report twice as often and three times as prominently about job destruction than about job creation, although in the period of the analysis an additional 30’000 jobs were created in total. This explains an important part of the perception. This exaggerated reporting is probably caused by the fact, that the creation of jobs does not happen in big “waves” as it happens with job cuts and second, companies do not communicate job creations as directly as when they announce the closing down of their business. Nevertheless, this leads to a distorted perception in the public.

Digitization is likely to further accelerate the structural change we have to face. In order for the economy to be able to still create many jobs in the future, good framework conditions are indispensable. The distorted perception of job losses leads to uncertainty in the population. This uncertainty, in turn, leads to unreasonableness and demands to regulate the labour market and take protectionist measures. However, this poses a real threat for the economy as well as the society. In conclusion, Switzerland is characterized by openness and diversity, a strong tradition of individual responsibility, a sense of community and a culture of consensus. These factors constitute the foundations that allowed us to cope with the previous structural transformations. We must continue to build on these values. Progress cannot be stopped or decreed, and that is fine. However, there is a need for framework conditions that promote both spaces of freedom and appropriate boundaries.